Vectors and One-Forms on Manifold

One form is a concept useful in integration, and the integrand is a one-form. One-form is critical perform integration on Manifold. This post follows Nakahara.

Vectors and Covectors in Euclidean Space

Roughly, a vector space is a set of entities that is closed under linear combinations. Both “arrows” and linear functions satisfy this definition and thus form a vector space.

Due to this remarkable fact, there exists a subset of vectors called the basis in the space, such that any vector in the space can be represented as a linear combination of members of the basis.

This suspiciously looking name of the co-basis is carefully chosen for later elaboration, now you can either see it as a derivative $\d$ or merely an abbreviation of “dual”, the real reason for doing this is in section Covectors on Manifold).

Action of Covectors on Vectors

This isomorphism is denoted as

Note that the inner product is defined between a vector and a dual vector, not between two vectors.

Gradient and Total Derivative as Duals

It is high time we addressed the weird choice of the name $\d x^i$. We first need a theorem

In Euclidean space, for any vector $V$ there is a non-empty set of functions such that $\set{f \mid \nabla f = V}$.

Therefore the gradient of a function $f$ is a vector, denoted as $\vec\nabla f$. Its dual vector is no other than the total derivative of the function $\d f$. The only transition you need is to admit that $\d x^\mu$ can act on a basis vector,

You can check that they fit in the above definition.

Moreover, the action of $\d f$ on a vector $V$ gives the derivative along the direction of that vector, which is a real number.

We all know what vector is in Euclidean space; a vector is formally defined as an element of a vector space, i.e., a set that is closed under finite vector addition and scalar multiplication.

Though on a manifold, things are a little different. There are three equivalent ways of defining vectors. To put them vaguely,

These definitions are equivalent to each other (proof). So after this chapter, we will make no distinction over these three definitions.

Vector is an arrow

When I think about vector on a manifold, I have the picture of some arrow tangent to the “surface” of a manifold.

Since in general there is no way to define a “straight arrow” connecting two points. Vectors can only be “tangent vectors”. In other words, vectors cannot live on the manifold itself, but the collection of tangent spaces over the entire manifold called the tangent bundle. That way, the vector is kept at a geometrical view. Thus a tangent vector is a generalization of the notion of a bound vector in a Euclidean space. 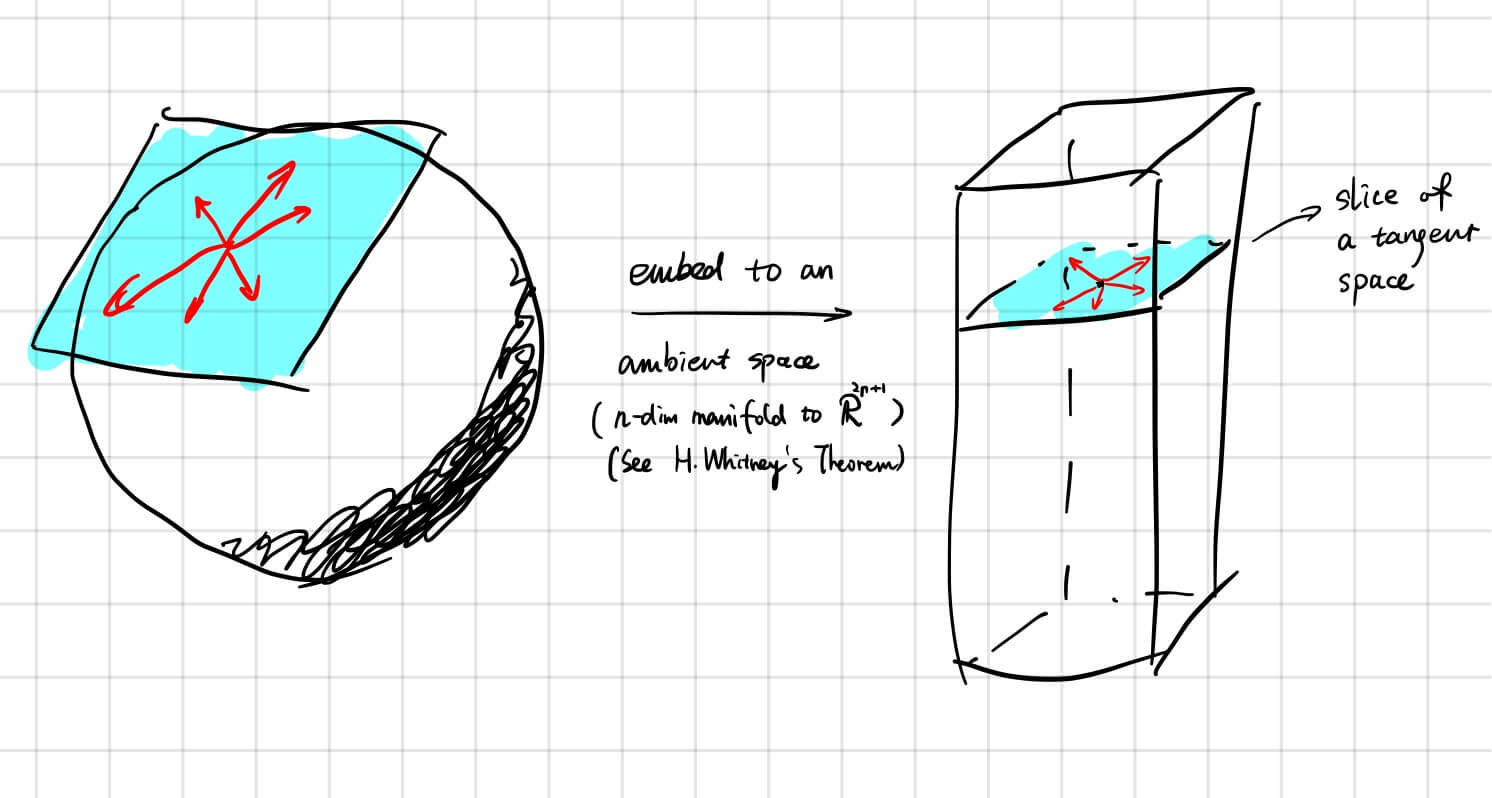 However, this requires embedding the manifold in some higher dimensional space, which is not very convenient since Differential Geometry aims at investigating the space (or maybe space-time) without jumping out of it. Once the vector is in an ambient space, it can be represented by a tuple of numbers. This naïve picture is reasonably intuitive and is mainly brought up as a heuristic way to introduce the next concept.

Vector is a (differential) operator

After I have finished writing this section, I stumbled on [A. Mishchenko and A. Fomenko’s book] and they really excelled at introducing the vectors in a natural way. You should check it out.

Most of the textbooks only tell you to assign to each vector $V=V^\mu\uvec e_\mu$ an operator $\op V=V^\mu \Partial{}{x^\mu}$. This makes writers happier for there is no further explanation needed - it is just a definition.

How did they come up with it?

Of all the things on a manifold, why did mathematicians choose differential operators?

Because the word “tangent” cries for taking derivatives.

Let’s start with a concrete example: a curved surface $\Sigma :\vec r(x,y,z) = Const$ embedded in $\R^3$. We are going to use this manifold in the context of spacial geometry as a tool to gain some intuition.

What is interesting is how differential operators resemble vectors. They have everything a vector has, namely closedness under linear combinations. From the above example, we can justify that a simple map: $V\rightarrow \op{V} =V\cdot\vec\nabla$ will keep all the properties a vector has, with additional necessary algebraic tools to perform calculations with.

Vector is an equivalent class of curves

From above we already know that one can find more than one curve to obtain the same differential operator. If we make a collection of all the curves correspond to the same vector, we can identify a vector with an equivalent class if curves.

Here it goes from Nakahara:

rather than a curve itself.

We can assign a vector, say $V$, to each point in the space $X$. This is equivalent to functions of the form $f:X\rightarrow V=(V,\R,+,*)$; i.e., functions which map every point of the space $X$ into the vector space $V$. A vector field can be seen as arrows sprinkled on a manifold as shown in the left. Alternatively, it defines a map from a point to a curve on the manifold as shown in the right.

A point follows the direction of vector field moves at a “velocity” of the magnitude of the vector, tracing out a curve on the manifold.

The Lorentz attractor can also be seen as a complicated manifold sprinkled with “velocity vectors.” (from Wikipedia).

A covector, dual vector, is an element of a dual vector space. On a manifold, it is also called one-form.

A dual vector space is all linear functions that map a vector to $\R^1$. In other words,

A dual vector act on a vector gives a real number.

A dual vector is a linear, real-valued function of vectors.

Having defined vectors on manifolds, now we are ready to define the dual of vectors.

If one seeks the covector of $V$, he can be equally satisfied asking the question: if the vector $V$ is treated as a covector, what would be the corresponding vector?

Notice that a tangent vector acts on a function gives the directional derivative of that function along the direction of the vector, rewriting $\Eqn{vector-as-directional-derivative}$ with special attention paid to the LHS:

We can also say that a function can somehow act on a vector and gives the directional derivative of the function.

Simply by playing with definitions, we obtain a natural definition of covectors on manifold. To emphasis that, we denote such functions as $\form f$. This is written as \(\form f(V)\dfdas\hat v(f) = \nabla _ V f(t)\in \R.\)

Here are the steps to find the expression for one form $\form f$.

We finally arrive at the conclusion that

Well, that is one boring result. It turns out that this “one form” can be written entirely in the form of integration. It makes great sense if you think of covectors (integration) as counter-parts of vectors (differentiation).

Still, the expression deserves more investigation. Ignoring the context of vectors and covectors, the expression $\Eqn{directional-derivative}$ as function’s derivative show that if two functions $f$ and $g$ have the same differential at $t=t _ 0$,

they will yield the same result,

Now we have made out what vectors and covectors are:

So far so good.

The problem rises when you read “A one-form is ‘a thing you plug vectors into’: you feed it a vector and it spits out a number which depends linearly on the input.” You are happy to do some exercises to enhance your understanding of this new concept of covectors. You are smart enough to only use basis of aforementioned vectors and covectors. That gives you

Well, that is not clear. You thought maybe if reversing the roles of vector and covector (since they are dual to each other), the result will make more sense. You arrive at

That is something you have never seen in calculus, yet it doesn’t look entirely wrong.

Then you turned to a text book for answer, [Sean Carroll] for example. In most (if not all) text books, the equation reads

A quick google search tells you that these operators are merely “notations”. Another answer went so far as to give the explanation that $\d f$ should be

That bugged me a long time as well. However, if I start from $\Eqn{basis-one-form}$, I know that the basis of “canonical one-form” should be $\int \d x$ rather than $\d x$. We only used $\d x$ to rule out the redundant one forms to establish a one-to-one correspondence. There should be no puzzle anymore since, in some sense, $\d x$ is indeed a notation. And the expression $\frac{d\phi}{d}$ do resemble $\int \d x$ if you think of $\d $ and $\int$ as inverse operations. These two explanations each being only half of the story. Only by combining them can one get a solid understanding of the basis of covectors.

At the end of the last section, vectors were generalized as mathematical objects with the form $X=X ^ \mu\Partial{}{x ^ \mu}$. Similarly, the corresponding one-form can be generalized as $\omega = \omega _ \mu \d x ^ \mu$.

This gives rise to exactness and closedness of one-form or $N$-forms.